On June 29, 1863 General Johnston moved some 31,000 men into place as the Confederate forces in Vicksburg were starving. It was communicated to General Johnston that the forces were asking to be freed or surrendered. Johnston was going to order an attack. As the looming battle crept forward, elements of the 3rd Texas Cavalry trapped a Federal patrol but after a sharp skirmish the Yankees withdrew. The efforts were too late and on July 4, 1864 General Pemberton surrendered Vicksburg.

No sooner had the surrendered taken place, did General Sherman begin his attack of Johnston. Johnston, overwhelmed by sheer numbers, pulled his troops back. Jackson’s cavalry division’s Texas Brigade was used as the rear guard to protect the retreating army. The 3rd Texas, 6th Texas 9th Texas and 27th Texas Cavalry Regiments fought for four days and nights disputing the ground with the foe. They covered twenty-five miles a day in the summer heat in a running fight. Until dispersed by artillery fire, the brigade held up the Union forces for a full day outside Clinton. In an effort to slow the Yankee advance, the Texans slaughter cattle and live stock and through them into the cisterns and water supply. Undeterred the Union soldiers pulled livestock from the fetid water and drank it anyway. On July 9th, Johnston ordered cavalry to defend Jackson, the Capital of Mississippi. Sherman ordered his artillery assembled and proceeded to pulverize and in one hour alone some three thousand cannon rounds were fired at them. The Texas Brigade was deployed at the extreme northern end of the defensive line. Dismounted, the 3rd Texas Cavalry engaged advancing enemy sharpshooters and artillery in the thick brush and wooded ravines adjacent to the Pearl River.

On July 14, General Johnston gave the entire cavalry an assignment that proved beyond their capacity to carry out. Johnston ordered the Cavalry to intercept a huge ammunition train caring the massive shipment of cannon shells that all Sherman to continue his fire. The entire division of some three thousand riders then bore down on the main road to Vicksburg where the ammunition train rumbled along between Bolton and Clinton. Sherman had all ready learned of the plans from a prisoner and was waiting. When they got close Sherman opened fired and this overwhelming fire from greater numbers proved too much and forced a withdrawal. Later the 3rd and 9th Cavalry were ordered to attack a Federal Pioneer train, including eight wagons were a fight ensued but neither side was able to claim a victory and withdrew..

Since the ammunition source of Sherman’s cannonade was not cut off this forced General Johnston to order a withdrawal of his forces. There was a series of fierce skirmishes were the 3rd Texas and the Texas Brigade engaged the enemy as the withdrawal took place. The hoses were famished and there was no forage. To add more hardship, heavy rains fell making the area a vast marsh and mud hole. Despite all of this, the cavalry continued to hold the pursuing Federal forces as Johnston was able to put thirty miles between him and the Federals. Finally on July 20th there was time for a rest. The 3rd Texas Cavalry came through this ordeal with only lost 6 men to being captured.

After six arduous weeks of skirmishing, the troopers of the 3rd Texas Cavalry went into camp on the 20th of July at Pelahatchie, twenty-two miles from Jackson. Colonel Mabry, now recovered from his wounds joined them. With time for rest, the 3rd Texas Cavalry and the Texas Brigade received much needed supplies. They found time to participate in a parade and there was a formal ball held that they attended. Even though a rest was ordered there was still duties of the cavalry that knew no rest. During the "rest" the 3rd Texas was but on picket duty, scouting and guard duty in addition to participation to raids and skirmishes as each regiment was rotated to these duties. 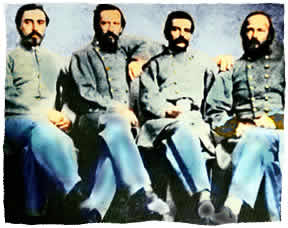 The 3rd Texas Cavalry was a very diverse cross section of Texas Culture. Among the Officers of the 3rd Texas Cavalry were from left to right, Refugio Benavides, Atanacio Vidaurri, Cristobal Benavidez and John Z. Leyendecker. The cavalrymen are dressed in the officer’s frock coat and are curiously absent of their cavalry boots. By 1864 many Confederate cavalry lacked boots and even shoes.It is suspected that this image was taken late in the war.

On August 15th, the Texas Brigade engaged elements of the Federal forces sent out to destroy the remnants of the Rebel railroad. The skirmishes were hot and heavy but the Texas Brigade found itself terribly out numbered. It resolved itself to hit and run tactics to delay the enemy. On September 28th, they again hit the Federal Cavalry but with better results chasing them, the pursued them back into the safety of their more larger army. This occurred about five miles from the Yazoo River.

Another engagement occurred on the Morning of October 15th when some 9000 Yankee troops headed toward the Big Black River in an effort to relieve forces near Canton, Mississippi. The battle was fought near Canton where some 4000 of the mounted Texas Brigade hit General McPherson’s advance. The battle developed with General Whitfield’s Texas Brigade holding the high ground in the wooded ravine overlooking the east bank of Bogue Chitto Creek. Though out numbered, they pinned the Yankees at the bottom of the creek with their artillery and small arms. At dawn on the 16th, the Yankee infantry swarmed up the hill. A second defensive position was set up and the defenders fell back some five miles up the road. The rain began to fall and the battle continued till nightfall. On October 18th the Federals began to withdrawal as they were peppered by the 3rd Texas Cavalry and the Texas Brigade.

General Whitfield’s health soon became bad enough that he had to be relieved of duty. Colonel Lawrence S. "Sul" Ross was appointed commander of the Texas Brigade.

One of the bravest and coldest ventures of winter war fare when Ross’s Texas Brigade was assigned a most important duty. Its job was to escort some 23 supply wagons into the hands of General Edmund Kirby Smith. He desperately needed the supplies, which were mostly weapons, and it was now in the dead of winter.

On December 22nd, they plodded north and eventually toward Arkansas. The rain began to pour and by the 1st of January 1864 the Texas Brigade found themselves bogged down deep in the mud. The mud was so deep that it was up to the horse’s chest. The rain turned to snow and ice formed an inch and a half. The men of the Texas Brigade had to physically extract the cargo of weapons from the wagons and carry them by hand. The ice bound supply line was now strung out for miles. The men now carried four extra rifles a piece on their horses as they rode west through sleet and rain toward Gaines’s Ferry on the Mississippi.

At the end of a forty-mile trek in the blinding snow they reach the river on the evening of January 5th. The Texas brigade found flat boats and pulled it into place with oxen. Freezing cold, several men volunteered to help fairy the boat across. Of the volunteers were three stepped forward for the 3rd Texas Cavalry. They were Sergeant Major Nathen Gregg, Sergeant John Long and Private Cyrus James, a Choctaw and part of the 3rd Texas. They manage to navigate the craft, some of them wading in the icy water some five miles. There on the other side of the bank, they delivered the weapons into the hands of the Arkansas Confederates.

When the men returned their clothes were frozen so hard that they could not sit down. No fires were to be allowed for fear of alerting the Federal forces in the area. They weather grew colder and though frozen, even more weapons were ferried across using various small boots found in the area. As the mission was accomplished, the cold became even greater. The horse’s hooves began to split from it and the Texas Brigade moved away from the river and bivouac. They killed wild hogs and warmed themselves.

On January 10, they started their journey back.

The 3rd Texas Cavalry now had a chance to rest and though it was bitterly cold, they did have a chance to renew their spirit. On February 1st, in response to a call from General Ross, they volunteered to a man to reenlist for the duration of the war.

Ross’s Texas Brigade was to be heavily engaged by the morning of the 3rd of February when they set up an ambush for Federal Troops steaming up the Yazoo River. The Federals had wanted to attack and hold Yazoo city as it was located in an area that was strategically located on the river. General Ross meant to keep the Federals from having it. He order the Texas Brigade to assault the Federal Gun and Troop boats as they travel up the river.

The 3rd Texas was concealed beneath some rugged bluffs over looking the Yazoo. Ross open up with his artillery and the battle was on. The battle continued till dusk and resumed the next day. The battle still continued as the brigade shifted down stream and attacked as the river bends. The advance was effectively delayed and the Texas Brigade was herald as heroes from the nearby town.

Ross’s Texas brigade was heavily engaged throughout the war and was never able to rest long. They were sent back toward their previous campground to reconnoiter which was in an area overlooking the Yazoo River. There on the 28th of February they engaged a Federal Cavalry force of about forty men who had stumbled up on a whole Confederate brigade. They opened fired and then withdrew. They were mounted on mules and no match for the Rebel Cavalry and were outflanked and destroyed.

On March 5th, having been joined by some 550 Tennessee Cavalrymen the Texas Brigade attacked the Federal Forces under the Command of Major George McKee. The overwhelmed them and the battle lasted for a day until nightfall. Yankee re-enforcement’s arrived the next morning fortifying the resistance to odds in favor of the Yankees.

The 3rd Texas Cavalry was to be a part of one more mission before leaving the area. The were part of a raid on Syder’s Bluff where they were to destroy a plantation to keep it’s cotton from falling into enemy hands. The raid was conducted with the 9th Texas Cavalry and was highly successful. They hit a squadron of Black cavalry, dispersed them, killing some 30 of them, destroyed all of the equipment, burned the gin, captured about a hundred mules and rode back unscathed.

General Red Jackson’s Division, of whom the Texas Brigade was part, was ordered by General Polk to proceed to Tuscaloosa, Alabama. They arrived on took up the line on April 4th 1864.

Seeing duty as pickets and reconnaissance, Ross’s Texas Brigade was sent with the Army of Mississippi to Rome Georgia. On May 4th, the Texans proceeded and rode 150 miles arriving on May 14th. The next day they went into battle. They were to be engaged continuously for the next 112 days.

Private Lon Cartwright served in Company E of the 3rd Texas and rose in the ranks. He is seated here in a poised image taken in mid-war. He wears an officer’s frock coat and knee high cavalry boots. He is wearing the regulation 1851 officer’s belt and buckle and is armed with a revolver. Though hard to make out, he also has a sheaf knife in his belt as well.